My #Me Too Story (Of a Slightly Different Sort)!

Memes, The Pandemic, and All of Us 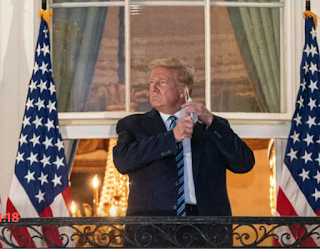 A Covid-Infected Trump Takes Off His Mask Before Entetering the White House
My partner has a deep affection for the idea of memes. I have always resisted the notion. On more than one occasion I have declared myself “anti-meme.” (For those too young to remember, this is a play on the 1958 movie Auntie-Mame about a free-spirited old aunt—a movie that ironically so enchanted my “never trust anyone under 30 generation.”)
The notion of memes analogizes the mental and cultural products we usually refer to as ideas to our biological genes. Like the reproducible units that determine our biological characteristics, mental products mutate and evolve as they are passed on to others. Also, like genes, they can sometimes devolve during errors in the copying process–as in the game of telephone.
I agree that ideas and genes are analogous to some extent, and analogies are often useful. They catch two dissimilar situations in the same mental grid, which helps highlight illuminating similarities. Yes, it is kind of fun, and even a bit interesting, to see ideas and genes as analogous.
Nonetheless, I object to the notion of ideas being flattened so much. Even the shape of the word meme is flat, with nothing above or below the line. The idea of a meme is a meme itself—as is the notion of never trust anyone over 30. The problem is that there is no concept that isn’t a meme, although certainly some are more successful than others.
Up to now, I have felt that grouping all mental products under the notion of memes takes away very much more than it offers. It catches ideas—those wonderful non-things that can soar above the material world as we know it—and imprisons them in the cage of materialism. But difficult times challenge all our assumptions, and the corona virus pandemic is certainly one of those times. I have revised my thinking about memes.
The key question to ask about an analogy is: Does it illuminate anything beyond what is already known? I have come around to the view that there are some deeper levels of correspondence to the analogy that may be illuminating about our situation right now. With the pandemic, the transmissible invisible fragments of DNA that make up viruses are implicitly, if not explicitly, front and center in all our minds. Not every virus is harmful, but those that create pandemics, by definition, are. We work hard not to be infected and to not pass them on to others—or at least many of us do.
Memes are like viruses because they infect others. (This may have been part of the reason Dawkins, who originally thought up the idea of memes, chose the word). Most memes are benign, and many are useful. But some are dangerous and even potentially deadly. Those that are both dangerous as well as highly infectious can make a huge difference in the quality of life of those it affects, as well as threaten personal and national survival.
We are facing two dangerous viruses now. The first is the Corona-19 virus. The second—ignoring just for the moment the very real connection between the current administration’s decisions and our failure to curtail the Corona-19 virus and its sequelae—is the Donald Trump virus. The notion of memes has an inherent connection to both of them.
Like all viruses, the Corona-19 virus has only one message. All it can do is say “me-me.” The Donald Trump virus, which is also deeply infectious and is proving just as deadly, has the same simple script. It too keeps saying "me-me.” The second “me,” transforms the legitimate need to stand up for oneself into rash selfishness that proclaim that the only thing of importance is me, right now, and whatever I want.
Respiratory viruses like Covid-19 infect others especially well when we yell. Likewise, Donald’s rageful venting about his litany of displaced grievances infects those who are vulnerable and causes them to make brazenly destructive personal and cruel political decisions. Emboldened by their role model of narcissism and immaturity, they filter everything through their anger and short-term needs. No surprise the two viruses have recently joined forces.
Take the notion that having to wear a mask during a deadly pandemic interferes with personal rights. The me-me infected are willing to trade the safety of their family, themselves, as well as everyone else, for their flamboyant and ill-informed view of liberty--as Trump’s Covid infection and continued mask-less behavior makes shockingly clear. What social contract?
Donald Trump represents an exaggerated version of everything that goes out of balance with the United States and its values. This, our shadow side, has now flipped around and become our full-frontal view. Our standard bearer and his supporters shout “me-me and the hell with the rest of you.” This has put our democracy in danger at so many levels. We are unlikely to survive unless we can defeat Donald Trump and create a stronger union that includes me, and you, and also takes into consideration the wider world. We need a new meme to counter the Trump virus, which alas now also means the Covid virus. Any suggestions? How about Me, and You, and All of us.
Posted by Lois Isenman at 8:54 AM No comments:

To Publicize or Not: Is That The Question?